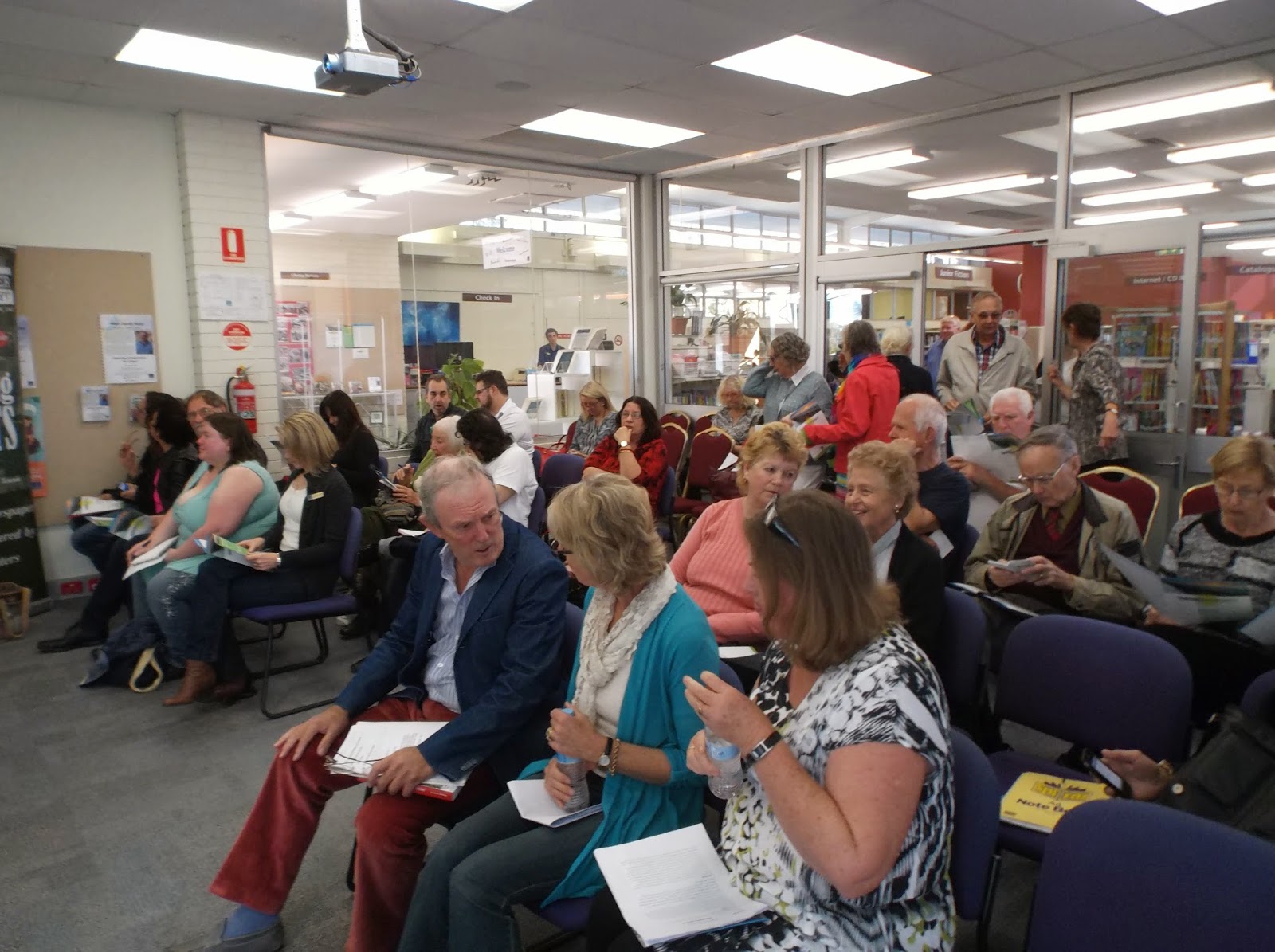 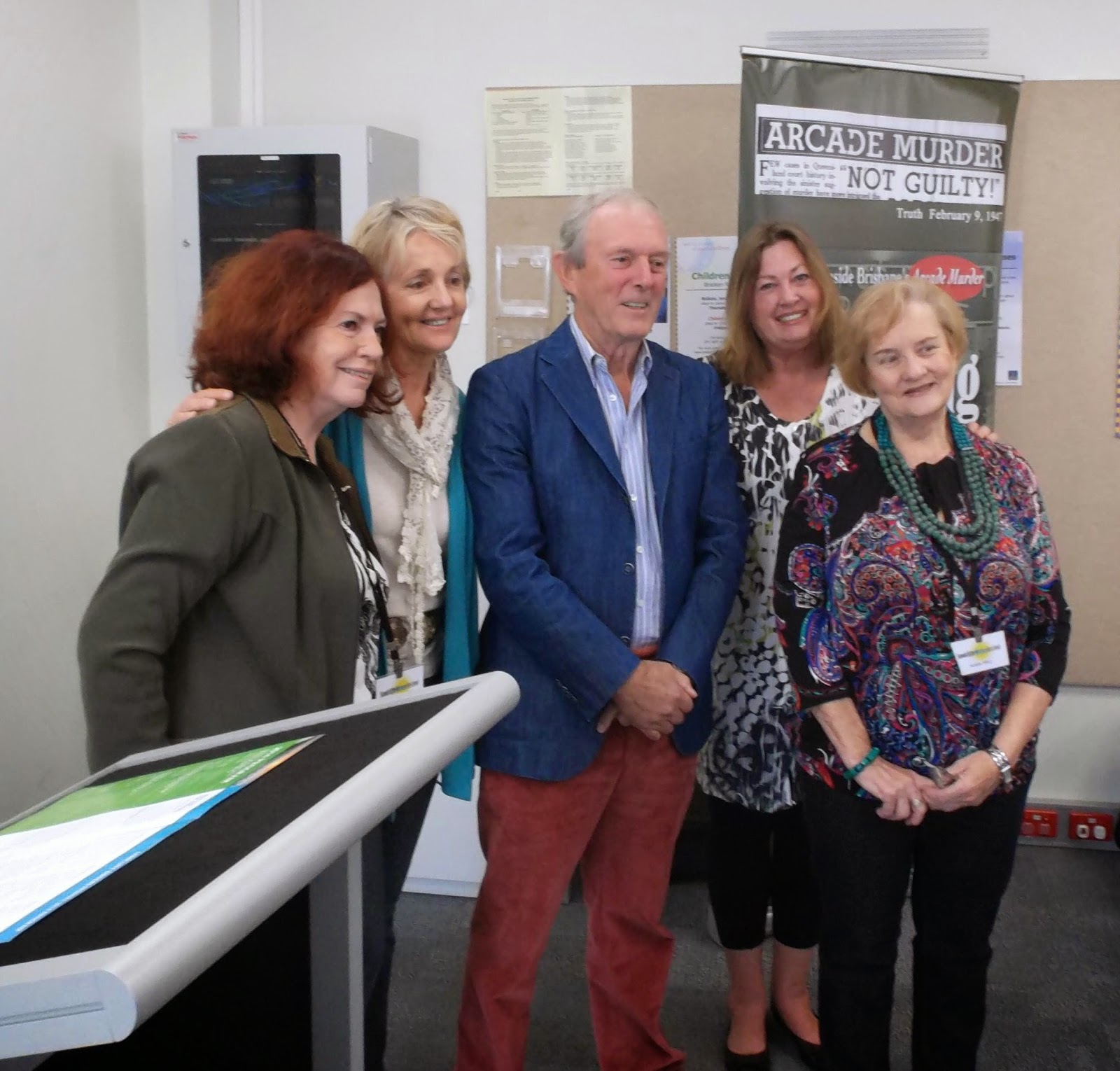 Many thanks to the staff at the Bracken Ridge Library for hosting our shared presentation today. Steve Bishop's informative albeit disturbing introduction, describing the police culture that once prevailed in Brisbane and in Queensland, led the way for us to tell our grandfather's story. Today we were reminded once again that the pain and suffering caused by past injustices continues to take its toll on families.  A member of the audience approached us with tears in his eyes as he spoke of the abuse and unfair treatment he received at the hands of the justice and penal system 50 years ago.  The trouble is the perpetrators - like Frank Bischof - got away with it.

Thank you also to Cheryl Jorgensen and Adele Moy for their dedication and hard work in organising this year's spectacular Sandcliffe Writers Festival.
From left - Cheryl, Deb, Steve, Janice and Adele
Posted by Deb D at 15:29 2 comments:

Information just received from Dr Moles:
Bob Moles has spent some time in Hobart in the last week or two.
The case of Susan Neill-Fraser. This is a shocking miscarriage of justice case:
http://www.jump-in.com.au/show/60minutes/videos/3741318855001/
I met with politicians and media people in Hobart last week.

I hope you find the program to be of interest.
Best wishes,
Bob

I came to "Lingering Doubts" as a sceptic. Instead, I find myself both fascinated and impressed.
Here is old-time Brisbane, twenty years previous to my earliest memories. Deb and Janice have evoked this lost city in loving detail. Few buildings remain today. The rattle of trams, full of people reading the Telegraph, are long vanished. The country town, with its contented and untroubled citizens, has become our bustling metropolis. A thousand small businesses in older buildings have given way to towering skyscrapers where only high-priced companies can find premises.
One of these former places was the rooms of the Brisbane Associated Friendly Society, upstairs at the now vanished Wallace Bishop Arcade. When I was a boy I met a very old Watchmaker who remembered "Old Mr Wallace Bishop" and the superior work he did on watches.
"Lingering Doubts" is no crime novel, featuring strange and wonderful coincidences that require convoluted solution. It is a true tale of Brisbane. It tells of the infamous Frank Bischoff, who was later to become the spectacularly corrupt Police Commissioner of Brisbane. He supervised the murder investigation of pretty young Bronia Armstrong. He weaved his web around mild-mannered accountant Reg Brown, with planted evidence and unsigned and unwitnessed "interview statements". That Reg was known for his steady employment, his good works, his happy marriage, meant nothing. According to Bischoff this man had spent weeks secretly planning to rape and murder his typist right there in the rooms, stowing her body in the back storeroom.
Fantasy featured deeply in Mr Bischoff's life. He led repeated raids on the milk bars and sandwich shops where Bodgies and Widgies gathered, confiscating their clothes and issuing them clean white shirts so they could look like decent people.
The corruption revealed by Queensland's Fitzgerald Enquiry was fully developed by 1947. Planting of evidence was normal practice. Police examined the medical rooms where the body was found. Later that day they came back for further examination, opened the Accountant's desk, and there in a drawer was the murdered girl's necklace. Look, we found a clue! This cunning and secret plotter must have left it there unwittingly.
I do not think we will ever know who killed this teenager. Reginald Brown was convicted. He had worn a hernia truss every day for years, but apparently that didn't prevent him from having his wicked way with the girl. Except, the autopsy showed she died a virgin. The makers of hernia trusses ought to have advertised the miraculous convenience of these devices, which apparently in no way inhibit a man's amorous activity.
I have done a good deal of research into various topics, but I take my hat off to Deb Drummond and Janice Teunis. They have uncovered police documents that never came to the courtroom. They found a still living sitness whom police pretended had never come forward. In fact, his testimony had been literally suppressed. They found detail after detail, document after document. People in their eighties recounted their knowledge of the case. An aged prison guard gave hair-raising accounts of almost unbelievable things that went on in Boggo Road Prison during the 1940s. "Lingering Doubts" is peppered with people like this. This book is easy reading but Deb has a file twice as thick, of back-up documents for every statement in the book, in case other researchers want to look too.
All these characters come to life in the book. The reader is right there among them. Those of us who love Brisbane will know that few books bring to life the 1940s city like this.
Greatly appreciated, Deb and Jan
Posted by Deb D at 20:53 No comments:

Lingering Doubts - Going inside Brisbane's Arcade Murder has now been included in Riverbend's Catalogue. Lingering Doubts available at Riverbend Books
Settling down with a cup of tea or coffee and a new book under the trees in this leafy haven... does it get any better than that?? :)
Deb and Jan
Posted by Deb D at 07:05 No comments:

Lingering Doubts to be presented with Steve Bishop

Back home now and looking forward to presenting our grandfather's story alongside Steve Bishop, author of The Most Dangerous Detective - The Outrageous Glen Patrick Hallahan and the Rat Pack at the upcoming Sandcliffe Writers Festival. Saturday's program below:

To see the full weekend's program please click here
Deb and Jan
Posted by Deb D at 10:11 No comments: