Lingering Doubts - Going inside Brisbane's Arcade Murder - Where to buy?

We are very pleased to advise Lingering Doubts is now available from:

What a splendid old building The Irish Club is! We were there yesterday at the launch of Life on a Column, written by Mike O'Connor and published by John, Lily and Beth McRobert. For anyone who reads the Courier-Mail, Mike is a household name (in more ways than one) as is Frances Whiting, who was his warm and equally amusing guest speaker. Great to catch up again with our publishing family and enjoy the company of guests, some of whom attended our own book launch in March but due to the numbers present, we were unable to meet personally. Thank you to all.
Deb and Jan
Posted by Deb D at 12:03 No comments:

On Saturday 28 June at 10.30 am, we will be discussing Reginald Wingfield Spence Brown's  case with patrons of the Brisbane Square Library.  The Local History Gallery of the Library runs a program of talks on various aspects of Brisbane/Queensland history under the banner "Brisbane's Modern Past". How honoured we feel to be included amongst the following, who have previously given lectures for the Local History Gallery.
Matthew Condon's "Brisbane" (Matthew Condon)
Dressing Colonial Brisbane Women (Dr Michael Marendy)
Brisbane Modern: mid 20th century design (Chris Osborne)
Notorious Australian Women (Prof. Kay Saunders)
Retro-fitting your home (Robert Riddel, architect)
Off to Bundy on the Beemer (Roly Sussex)
Between Two Coasts (Peter Spearritt)
Building Brisbane's History (Helen Gregory)
Once again we very much appreciate the opportunity to share our grandfather's story and this disturbing chapter of Brisbane's criminal history.
Deb and Jan

Jacks and Jokers and Lingering Doubts 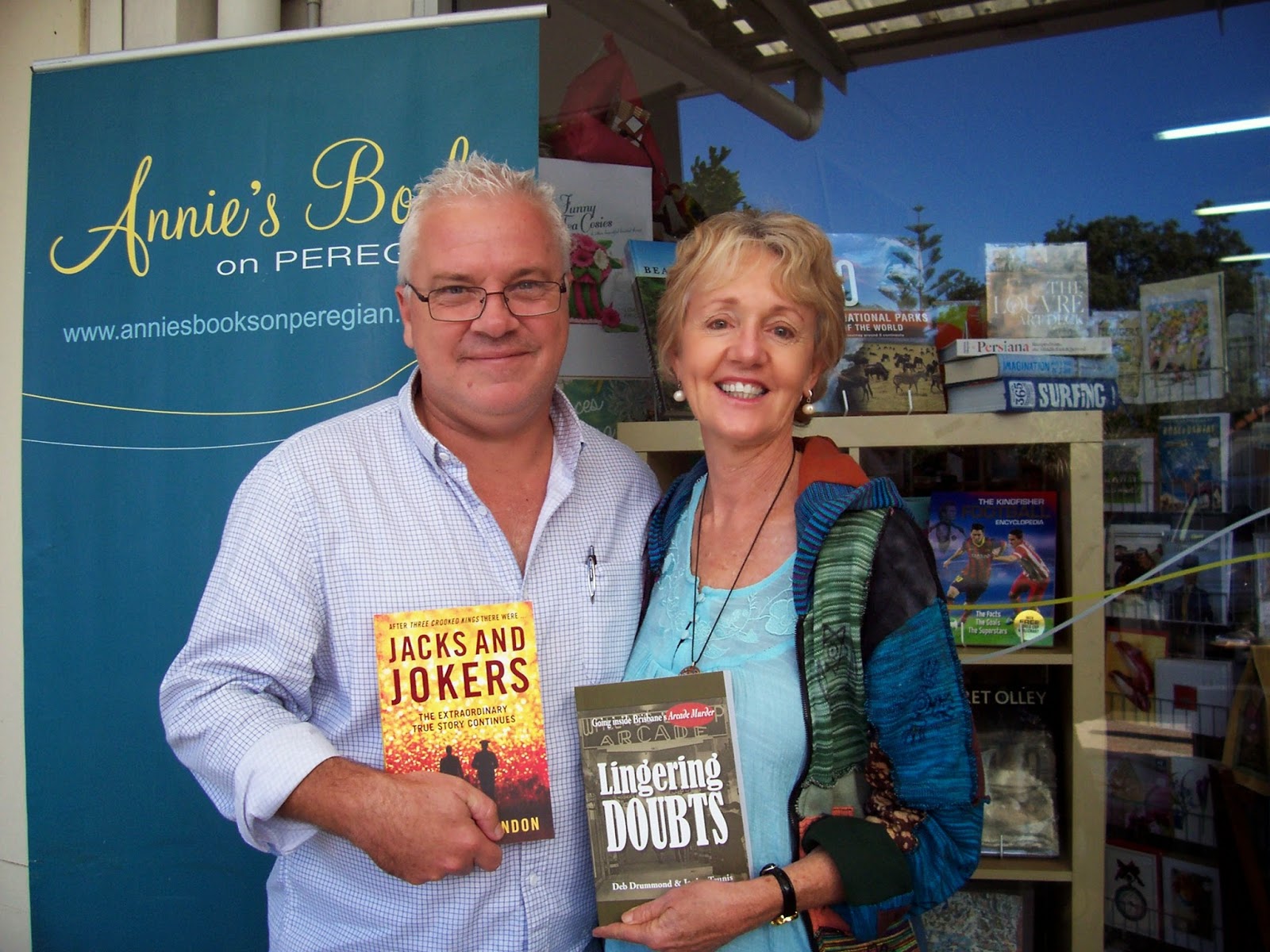 Matt Condon has probably become more informed than most about Brisbane's  history of  corruption. As always corruption boosts the egos, careers and bank balances of some while others must be destroyed or obliterated.  Lingering Doubts is about giving our grandfather a voice, and naturally, we are thrilled to have Matt's support. After almost eight years of research and writing (including at least 5000 tweaks and edits and the invaluable assistance of Copyright Publishing) our book made it over the finishing line uniquely positioned between Matt's  Three Crooked Kings and  sequel, Jacks and Jokers.  Our grandfather's disturbing story was instantly believable.
Photo taken last Thursday by Alison Quigley (Sunshine Coast Literary Assoc. Inc) when Deb and sister, Faye, spent time with Matt, Annie and Rachel at Annie's Books on Peregian, where we are pleased to say, copies of Lingering Doubts can now be purchased.
Deb and Jan
Posted by Deb D at 12:52 No comments:

If you would like to meet us and hear the Lingering Doubts story we invite you to come along to Mary Ryan's Books, Music & Coffee, Park Road, Milton at 6.15 pm on Thursday 26 June. Sparkling and refreshments will be provided as we  touch on  our pioneering ancestors and discuss the research and writing journey that culminated in Lingering Doubts. We'll also take guests back to a dark time in Brisbane when a man could be arrested and sentenced to life imprisonment within the space of eight weeks. Although we welcome every opportunity to re-present our grandfather's case to the public, speaking about him at Mary Ryan's in Milton has particular significance. Coronation Drive is in close proximity and it was along this road our grandfather travelled to and from work. He commuted for the last time on the morning of 11 January 1947 and never again returned home to St Lucia as he was arrested for murder. Coronation Drive is also the address of the historic Regatta Hotel. built by our great-great grandfather, William Winterford. Hope to see you at Mary Ryan's.
Deb and Jan
Posted by Deb D at 21:42 No comments:

We're pleased to advise that copies of Lingering Doubts are now available from the very popular  Annie's Books on Peregian....and also, from personal experience,  a fabulous place for a picnic. Matt Condon will be visiting Annie's on 19 June to speak about, and sign copies of, his recently released Jacks and Jokers. We will always remain amazed at the timing of Matt's explosive books about police corruption.  Three Crooked Kings paved the way for Reg Brown's  case to be re-presented to the public and Jacks and Jokers leaves no doubt about the true depth of corruption that was once prevalent in Brisbane. We not only throw significant doubt on our grandfather's guilt but also on the guilt of others who found themselves defenceless against police generated evidence. We now wonder at the number of families who may have suffered, as our family did, under the judicial system of the day?

A digital copy of the article Matthew Condon wrote about Lingering Doubts in Qweekend (12-13 April)  can be seen on Dr Bob Moles' NetK website
courtesy of our long time supporter Mr Bob Bottom (OAM).
Deb and Jan
Posted by Deb D at 11:18 No comments:

Click here  if you would like to see a photo of us with former President Shirley Lawrence at a meeting of the Society of Women Writers, Queensland. We were invited to discuss Lingering Doubts and our grandfather's story at their meeting in April of this year. What a wonderful group of ladies, not only a bunch of sunflowers as the link will show but also helpful, interesting and talented. The support we've received from each and every person not only makes the learning curves a little less daunting, but helps us achieve our main objective of giving our grandfather the voice he was denied. We look forward to seeing the ladies again at the Sandcliffe Writers Festival.
Deb and Jan
Posted by Deb D at 09:57 No comments:

Dr Bob Moles sent us an interesting article published in the Canberra Times and the Melbourne Age about the David Eastman case. Eastman, currently in jail, was convicted of the murder of AFP Assistant Commissioner Colin Winchester. Click to read

Dr Bob Moles is the coordinator of the Networked Knowledge (Netk) website and is a tireless campaigner for justice. His book, Forensic Investigations and Miscarriages of Justice (co-written with Bibi Sangha and Kent Roach) has been credited with the recent changes to the appeal laws in South Australia.

Who would ever have thought our grandfather's case would be included on the Netk website?! Along with Dr Moles' analysis of Lingering Doubts the Netk website also includes the speech veteran investigative reporter and author on organised crime, Mr Bob Bottom OAM gave at our book launch earlier in the year.
Click to read Bob Bottom's speech

I wonder if Australians truly realise what a great debt they owe people like Bob Bottom and Bob Moles and others who put in enormous effort, tirelessly campaigning and making personal sacrifices, for the good of society.

To keep abreast of what's happening in Brisbane, especially in the literary world, take a look at Watchwords, Lois May's most informative website. An absolute wealth of information! Thanks most sincerely Lois for all your advice and support  and for consistently advertising our upcoming events. Click here to read
Deb and Jan
Posted by Deb D at 20:45 No comments:

Jan and husband, John, in their charming St George garden.

Today the Truth newspaper published an extensive article including a one-off interview with Reg Brown's reserved although courageous wife.


"MY HUSBAND WAS NOT A MURDERER," BROWN'S WIDOW DECLARES

From the moment of its perpetration in a city office on January 11 to the final curtain fall in the Brisbane Coroner's Court on Tuesday last, the murder of vivacious, 19-year-old typiste [sic] Bronia Armstrong by 49-year-old accountant Reginald Wingfield Spence Brown remained on official records as the most psychologically-baffling crime in Queensland history. ............ and the public generally has accepted the Criminal Court jury's verdict that Brown took a human life. But not Brown's wife, his son, or his daughter. They believe, despite everything that was said, and all the evidence that has been produced, that Brown was blameless. They see him as a grimly wronged man. They believe implicitly his last written words, in pencil, on a sheet of gaol paper: "I did not murder Bronia Armstrong. My conscience is clear." They care not what the world says, or does, or thinks. They have utter, abiding, unshakeable faith in their now dead household head.

It appears the Brown family weren't the only ones unconvinced of Reg Brown's guilt. Eva Brown said she had received many letters and telegrams of condolences from people who believed in her husband's innocence.
Sadly, ten days after this interview, our grandparents, Reg and Eva, should have been celebrating their 26th wedding anniversary.
Sixty-seven years on, many more people, after reading Lingering Doubts, have also formed the opinion that Reg Brown was indeed 'a grimly wronged man'.
Deb and Jan